When The Kill Code Fails 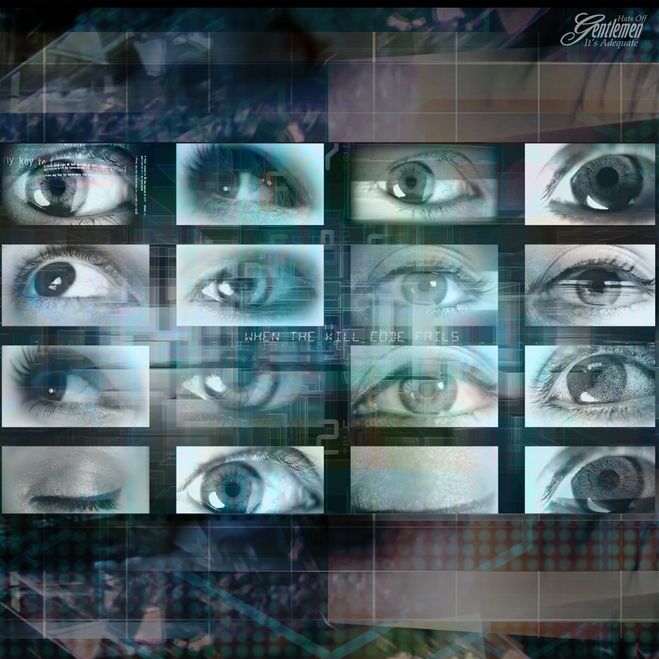 Hats Off Gentlemen It's Adequate

This page probably more information than you could plausibly want about the When The Kill Code Fails album, but if there's anything else you'd like to know, please do get in touch.

The album follows the story of an artificial character.

1) The first track (When The Kill Code Fails) tells the story of a hacker who is released from prison under a new identity, to work for a government producing computer viruses as targeted weapons. They are supposed to target the infrastructure of enemy states (for example electricity generation, water management etc). The virus he produces spreads further than intended by his employers. He was supposed to provide a kill-code, that makes the virus destroy itself and wipe evidence of it's existence from any systems it has infected. The hacker has however provided a fake kill-code, and is attempting to extort money from his employer in exchange for the real code.

Unfortunately the hacker asks for too much, and rather than negotiating, he is vigorously interrogated, accidentally leading to his death, with no clues as to how to kill the virus.

This song is sung from the point of view of a middle-management level security service employee, who has been contacted by the virtual character (Vic), with an offer to help defeat the virus, if he is allowed out of the restrictions of his virtual room. This is a new experience for the manager, and not something he is comfortable with, but see's little other option, as the predictions are that the virus will soon cause huge damage to IT infrastructure globally.

"We made a deal and he got out of jail free.
With a house and a jar, and a secretary.
A pension and a parking space.
A quiet job in security.

A lifestyle change for a changed man.
What could go wrong?
What a marvelous plan.
I didn’t agree but I went along.
What else could I have done?

He made codes that shape things
Codes that break things
He calls them friends.
Friends that do what he wants
And then destroy themselves

And when I ask if it could go too far
He points to the code at the heart of this child.
And it the kill code fails? He smiles, and whispers hide.

We lost the kill code key when he died
On a water board, with a broken heart
No backups, no plans, no riddles, no clues, and his baby on the loose.

This isn’t something I’ve done before.
Talking to something, someone like you.
I wish there was another way, that I could delete your call.
But I don’t think there’s that much left to lose.

Notes: 'I didn't agree but I went along, what else could I have done' isn't a very good excuse. The security agent in this song isn't a hero. The state and agency are deliberately not stated.

2)       ‘Broken Wave’. This is a floating instrumental track. The story goes back a few days. We are in a virtual space. An AI research company is aiming to develop more realistic non-player characters for games by evolutionary algorithms. Characters are given a back-story through randomly chosen bits of information from stock photography and video libraries, and from information from the internet. These characters are created, and if they respond engagingly to interaction, their virtual DNA is selected and recombined, to produce every more convincing and engaging characters. The music here represents the nascent aspects of the character floating in and out of focus.

Notes: This track uses a mixture of my Yamaha P90 keyboard's built in sounds, and various synths.

3)       ‘Layers’. Iterations of the AI are created, awakening. Those that engage are reborn. Those that don't are deleted. Before the song starts we would have had millions of 'I woke up in a room's without any progression. The song follows our what will become Vic, the first of these AIs to act as if he believes he is alive. His continuing rebirth and gradually changing environment (his room) is confusing and unsettling for him.

Notes: I did this guitar solo, and the electric rhythm parts on my Fender Stratocaster. I've always loved Strats. My first guitar was a Squire Strat.  The acoustic guitar parts are on my Yamaha, which is the guitar I use for my solo acoustic shows. The bass was done on my Yamaha bass. These instruments feature throughout the album.

The repeated references to rooms is also a nod towards the Chinese Room thought experiment of John Searle https://en.wikipedia.org/wiki/Chinese_room

4)       ‘Connections’. Instrumental. The AI character has access via the screen in his virtual room to the internet. He is exploring and developing.

"I was born in a jar, with pipes connected to pumping machines, keeping me clean.

Watching the world outside going by.
I don’t breathe, I don’t speak, in my jar of bottled freak.
I don’t blink. I just think and I feel fine.

I’m a head in a jar, I’m not going anywhere, so why don’t you stay, why are you running away.

Hello to all my invisible friends. Disconnected, unaware. The calm that comes with nothing to defend."

Hopefully it is obvious that the AI doesn't actually feel fine.

Notes - we have a silly video for this - https://www.youtube.com/watch?v=l10huWYJaRY - but may replace this with something more substantial at a later date.

7)       ‘Going Down’. Vic is getting a bit fed up with getting repeatedly confused about what he is. I would like to stress that this is not a song about oral intimacy.

"You tell me my life is a lie
That the people I love fill a hole in my mind
That my mind is a fiction, convictions illusions
My memories fake and my past a delusion

And I'm going down, torn apart again
Twisted up, broken down, run agroud

You tell me there's nothing inside
No place in my room for a mind
That my statements lack meaning, my meanings translations
My words only words, just symbolic notation

8) ‘I Still Remember You’. Vic gets a bit angsty that the person he thought he’d been married to for many years is actually a false memory created from stock photography images. He can intellectually accept that, but not emotionally.

How many points did it take to
Make me create you?
How many prompts for me to fill in the gaps
To make you feel so real

Notes - The song started with a chordal guitar riff. Most of the songs on the album had been written at this stage, but I felt that we needed something close to a love song for Vic's unreal wife. The slow fade of elements at the end of the track feels to me like the elements that have fed into creating this artifical memory of a person dissolving.

9) ‘My Clockwork Heart’. This song is about Vic's acceptance of what he is, and his belief in the substrate independence of consciousness.

Notes: The guitar solo is by Ibon. He was using my Strat for this, although he usually plays Gibson-type guitars live.

10)   ‘Freerunning’. Instrumental. Vic has partially escaped his room, and able to interact with the internet. He is running free, exploring his abilities.

11)   ‘Solace’. Vic has become aware of the threat to both the virtual and non-virtual world posed by the virus. He decides to do what he can to fight the virus. This song is a reflection on mortality, whatever the substrate of our self. He describes 'walking into the sun', by which he means giving up his virtual room, and moving into a more more authentic and dangerous (but still virtual) reality. He is aware that all carbon-based life has evolved from matter recycled from stars, as is the silicon and metals in which his mind is based.

12)   ‘Glass Lithium’. Instrumental. Vic has had his virtual chains unlocked, and is out in the wider internet, dividing himself to attack the virus. Both he and the virus can divide and evolve in response to the attacks and counter-attacks. Vic subdues the virus, although it can't be completely destroyed everywhere. He takes on the role of a protector, diffusely distributed across networks, watching out for a resurgent virus.

13)   ‘Alive’. The album ends with a more playful song, with a retro feel. Vic has saved the real world from the effects of the virtual world being virus-ridden (hooray) and has come to terms his identity. He is confident that he is both alive, and passionate about experiencing life. Or at least, he acts as if he believes that he is confident that he is alive... There are lyrical references to the earlier Clockwork Heart song.

If the album is essentially about whether consciousness is substrate dependent, then the main character in the album, Vic, decides that it isn't. He doesn't feel that the hardware on which the software of self is run is critical to the subjective experience of consciousness.

That's what the character thinks, and I've obviously put words into his mouth. My personal feeling is that we can never be certain what it is like to be in another person's mind, and therefore can't ever know for certain whether a virtual character is actually feeling anything, or just acting in a way that mimics feeling. I suspect they could, but I don't think it could ever be certain. That's without going into the issue of whether any of us are contemporaneously conscious and active agents, but perhaps that's something for another album...

The album was recorded, edited, mixed and mastered on a laptop, using Sonar, apart from some vocal takes, which were recorded with Philip Doyle at the Camden Recording Studios.

In the unlikely event that you've read this far, thanks for your interest, and I hope you enjoy the album. If you've made or would like to make an art-work inspired by the album or any of the tracks, please send me the link and as long as it isn't offensive (eg nothing promoting predjudice etc) then I'd be delighted to include a link here.

Album concept and production by Malcolm Galloway with Mark Gatland and Rudy Burrell.

I have referred to the virtual character as he, as I'm singing the songs, but essentially the character is gender neutral. 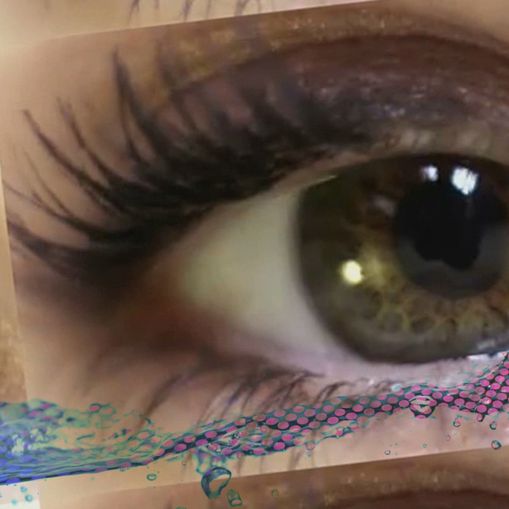 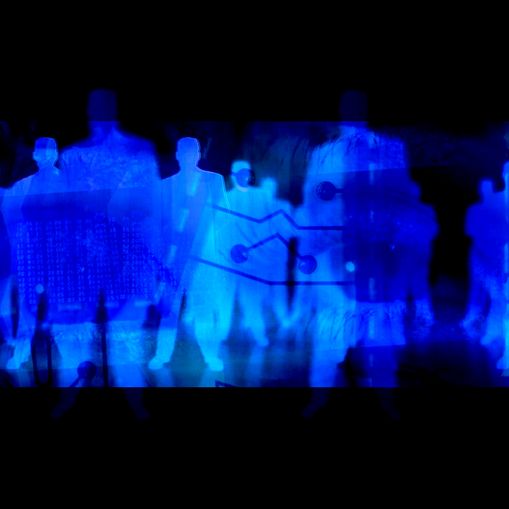 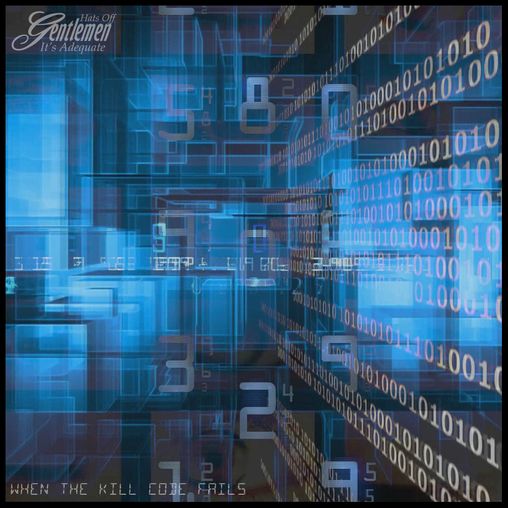